The new Carver: rebellious yet practical

In 2002, an earlier version of the Carver had the presenters of the motoring programme Top Gear jumping for joy. Now, in 2019, a completely new version is about to be launched on the market. The electric three-wheeler with an enclosed cabin is much more practical and affordable than its predecessor, while still offering a sensational driving experience. The secret behind the Carver is its dynamic tilting chassis developed by inventor Chris van den Brink. "Even after20 years, I still think driving a Carver is a fantastic experience; why it hasn't caught on more widely remains a mystery to me."

The same was true of snowboarding, another activity which Van den Brink discovered early on but which practically no-one else knew about at the time. A skilled lathe, milling and welding operator from a young age, he therefore decided to make his first snowboards himself. After all, who wouldn't prefer to fly around corners on a board specially designed for the purpose rather than make do with traditional skis, which just want to point straight ahead? In fact, Van den Brink thought snowboarding was so ‘cool’ that by 1988 he was working as a professional snowboarder in Austria, even before completing his aeronautical engineering degree in Haarlem, the Netherlands. "Because I arrived on the scene so early, it wasn’t long before I was good enough to be a pro." In the summer of 1994, Van den Brink reluctantly returned to the Netherlands to complete his studies at his father's insistence. "I came back the day before my final exam. I was good at learning so I got through, but haven’t used my qualifications since." His father, whose firm made injection moulding components, was keen to build a one-man-wide vehicle that was far more efficient, economic and eco-friendly than standard cars. The rationale was: why use 2,000 kg of steel to transport one person weighing 80 kg? So he asked a couple of students to work up various ideas. The most promising was a two-wheeled design with a tilting driver’s cabin and foldable side-wheels for added stability.

We decided right from the start to protect the underlying innovative principle by taking out a basic patent on it.

One of these co-designers was Harry Kroonen, who’s still Van den Brink’s right-hand man and “sparring partner for crazy ideas”. The two men decided to build a prototype together (given that there wasn't much snowboarding in the summer anyway). "That first model, with two wheels and a side-wheel, was a complete failure. It steered like a car but cornered like a motorbike. Almost no-one could get to grips with it." Plus there were some technical glitches. When the vehicle tilted, the cabin would sometimes get stuck and be unable to return to the vertical. The tilted cabin exerted an enormous pull on the steering wheel when you tried to drive off. "And that’s when the penny dropped! The torque exerted on the steering wheel is an exact indicator of how out of alignment you are. So when the torque is zero, you’re at the correct angle. The same applies when you’re taking a corner."

Using the ‘steering torque defines angle of tilt’ principle, they built a new prototype, this time with two rear wheels and a single wheel in front. This worked straightaway and everyone who tested it drove off very easily. There was an added bonus: tilting over without any feeling of sideways ‘pull’ when cornering also gave you a spectacular driving experience. Van den Brink senior wanted to call the model the EcoCar, but Chris was strongly against this. "In those days, eco wasn’t cool; telling people a car was eco-friendly wasn’t going to sell it. Perhaps today, but not then. Instead, I wanted to stress the amazing driving experience it gave you. The concept is rebellious yet practical, rather like snowboarding." And so the Van den Brink Carver, named after a cornering technique in snowboarding, was born. 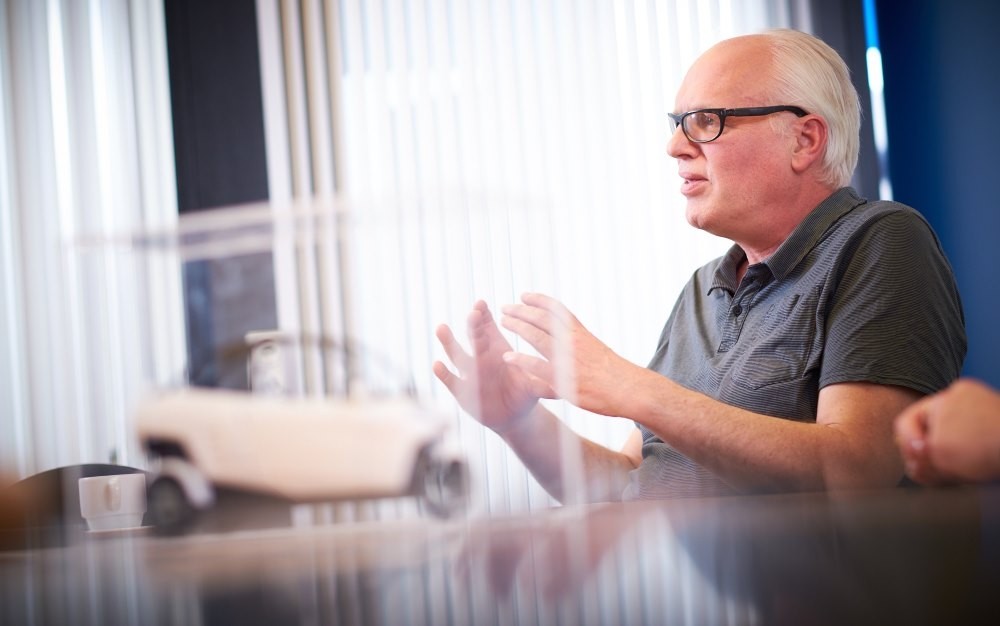 'The best gadget of them all'

The launch prompted a lyrical review by Top Gear, which described the Carver One as ‘the best gadget of them all’ and 'a miniature road-going fighter plane’. Presenter Jeremy Clarkson said he’d never had so much fun in a car. "After the broadcast, we were inundated by requests for Carvers from all over the world. The only problem was, I wasn't in a position to make any." At that very moment, engine-maker Daihatsu was also ordered by its new owner Toyota to stop supplying customers like Van den Brink. “It would be several more months before we would be able to resolve that issue, and we simply couldn't keep the company going for that long." In 2009, Van den Brink went bust. However, in what proved a stroke of genius, they managed to exempt the patents from the liquidation and keep them in the family’s control.

In the years that followed, a stream of income from licensing agreements enabled Van den Brink and Carver’s CEO Anton Rosier (Van den Brink had opted to be technical director) to at least maintain these patents. Throughout this time, Van den Brink never doubted the strength of his original concept, a belief he liked to confirm through occasional outings in his Carver. He continued developing his ideas, and in 2014 he and Rosier decided to make a new attempt to launch the Carver. In 2017, they persuaded bicycle company Accell to invest in the development-to-market of the initial Carver prototype. The only original element that was retained in the new model was the basic principle – steering torque defines angle of tilt; practically everything else was different.

But the biggest change in the new Carver is that it’s fully electric. It has a top speed of 49 kilometres per hour and can be driven by anyone over the age of 16. It’s intended to fill the gap between electric scooters and electric cars in urban settings. Above all, the new Carver is practical: it’s ideal for commuters who want to arrive at work relaxed and dry, or for home care professionals and estate agents who currently waste a lot of time looking for parking spaces but can now simply park their new Carver on the pavement. The vehicle is narrow enough to go through your front door or into your shed, and you can pull up alongside conventional cars at the traffic lights (“You could do that with the old Carver too,” Van den Brink points out).

Interview Read the whole interview with Carver "I’ve seen so many rival concepts put forward in a bid to get round our patents, including by global players who’ve got more than enough money to pay for a license. It's often more than obvious to me from the start that these concepts aren’t going to work."
Share this page