Trademarks
The Court in Brussels has ruled that Hema needs to pay nearly 4.5 million euros in damages to Levi's. The reason? The stitching on the back pockets of Hema jeans. These seem to be too similar to the 'Arcuate' stitching that Levi's has protected as a trademark. 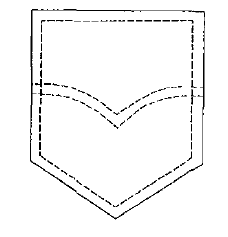 Levi’s ‘Arcuate’ stitchings, registered as a trademark in the Benelux and the EU.

Levi’s has registered the Arcuate back pocket stitching as a trademark since 1981 in the Benelux. Levi’s has this registration in the EU as well since 2004. Therefore, Levi’s is letting everyone know that these are not just stitches: this is their logo. Their jeans can be recognized by its back pockets.

The conflict about back pocket stitches already started in 2003. During that time, the case was settled, under the circumstance that Hema would never use Levi’s trademarked stitches again, which consist of one or multiple curved lines that meet in the middle and point downwards.

However, 12 years later: Hema is doing it again. The stitches on their jeans are allegedly too similar to the Arcuate stitches. Levi’s files a lawsuit.

The Hema stitchings from the case

The criterion used in order to determine whether there is a trademark infringement is the likelihood of confusion. Could the target consumer think that the Hema jeans with the stitches in question, can actually be Levi’s?

The Court ruled that, although the Hema stitching’s are not identical to the Arcuate stitches, they are very similar without a doubt. Secondly, both stitching’s are used on the same products, namely (children’s) jeans. Hema argued that Levi’s barely sells jeans for children, but this argument did not hold up in court. Moreover, the Court ruled that the Arcuate stitches are well-known in Belgium.

The Court decided that Hema has to pay back 20 euros per sold, infringing pair of jeans in damages to Levi’s. Since the matter concerned 221.603 pairs of jeans, Hema was convicted to pay a compensation of 4.432,060 euros to Levi’s.

Although Hema can still appeal the case, this judgment is a wise lesson for all jeans manufacturers and designers: Do not mess with the Arcuate stitches because Levi’s does not play around.