Is China the AI leader? Not yet

Artificial intelligence (AI) is fundamentally changing our way of living and it is forming an exciting future for human beings. China is widely believed that it is already or at least will be the leader soon in this new technology revolution, and the Chinese government is not shy in promoting AI developments in China.

Some hints can be found from the World Artificial Intelligence Conference 2020 Summit held in Shanghai in July, which showed many aspects of the AI force in China.

However, is it true that China is the world leader? In this article, we look at this question from the patent perspective. Using the patent database/analysing tool Orbit, we have searched with the key words “neural networks OR deep learning” in the title, abstract or claims of live patent families to make sure that they are closely related to AI technologies.

A comparison of AI patent families in China, the US, Europe (European Patents), Korea and Japan (ie, the ‘big five’) is presented and discussed in this article.

Note that the data presented in this article is merely an indication of the overall situation in AI patent industry. The minor flaws of the database were ignored. The Orbit data was collected up to August 26, 2020.

In total, 17,880 AI-related published patents/applications have been found from Chinese applicants/assignees, of which 13.5% have been granted and the rest are still pending.

The high pending ratio indicates that most of the applications have been filed only recently (note that the average pendency period at CNIPA in 2018 is 22.5 months). The general growing trend in China is shown in Figure 1, where only since 2016 has the filing number started to significantly increase.

Including the unpublished applications also filed in 2019, the total filing for last year will be extremely high. These numbers show tremendous interest in AI from Chinese industry and academia.

Despite owning a large number of patent families, Chinese companies still have limited worldwide influence in the field of AI. 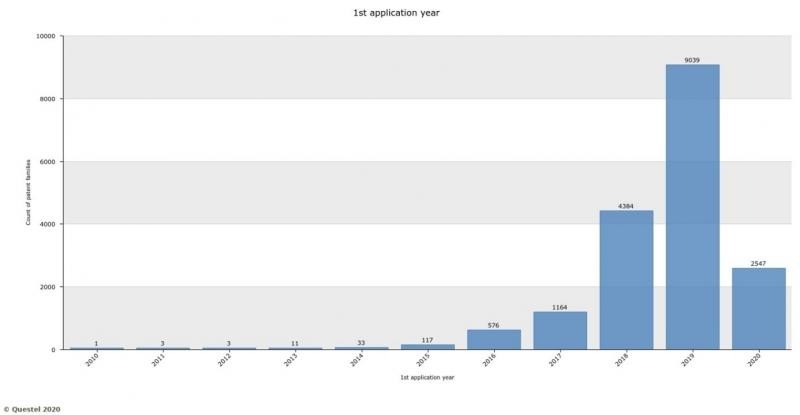 Figure 1: Number of live patent families from Chinese applicants between 2010 and 2020

On the one hand, these numbers certainly indicate the strength of Chinese scientific research and education in the AI industry, and most importantly, many AI specialists are entering the industry every year from these education entities.

On the other hand, the technology transforming ability of these patents/applications (from universities and institutes) is not clear since they may merely be filed for other purposes (eg, requesting public funds or to enhance academic reputation).

Therefore, these applications are less likely to be filed internationally, thus, they have limited international influence. So we excluded the university and research institute applications in the below analysis and focused only on the 8,930 patent families from corporations and industry.

The top 30 Chinese industry applicants in the field of AI are listed in Figure 2. Among these companies, some of them focus only on the domestic market and rarely extend the protection in another territory, for example the state-owned power grid company, State Grid Corporation of China (SGCC).

Traditional internet companies such as Baidu (Beijing Baidu and Baidu Online), Alibaba (Alibaba and Alipay) and Tencent (together known as BAT), are high on the list with 213, 204 and 168 families, respectively.

Ping An group (Ping An Tech, Ping An Tech Shenzhen and Ping An Life Insurance), which is a relatively new player in providing technology solutions mainly for the financial industry, takes first place with 243 families.

Compared to BAT, Ping An group was less well known as an international player in the past, as previously only a small part of its patent family included patents outside China (mostly European patents).

The top five applicants own about 10% of the total portfolio. One rising star, Shanghai Eyes Control Technology, deserves attention. It was founded in 2009 and has a core business in many AI implementation fields, eg, smart traffic, facial recognition, natural language interpretation, and so on. At this moment, its patents are still mainly focused in China, but it may expand to other territories quickly in future.

Despite owning a large number of patent families, Chinese companies still have limited worldwide influence in the field of AI. For example, in the total 8,930 families, only 514, 511 and 400 have filed patents at the European Patent Office (EPO), World Intellectual Property Office (WIPO) and US Patent and Trademark Office (USPTO), respectively.

To identify the worldwide players from China, we searched families published with the prefixes ‘WO’ (WIPO), ‘US’ (USPTO) or ‘EP’ (EPO) from Chinese companies, which showed 835 patent families with 30.9% of patents granted. 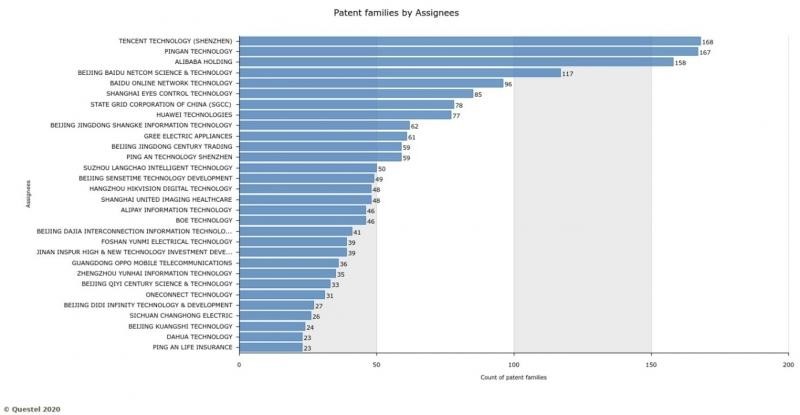 Figure 2: Top 30 companies in China that own AI patents 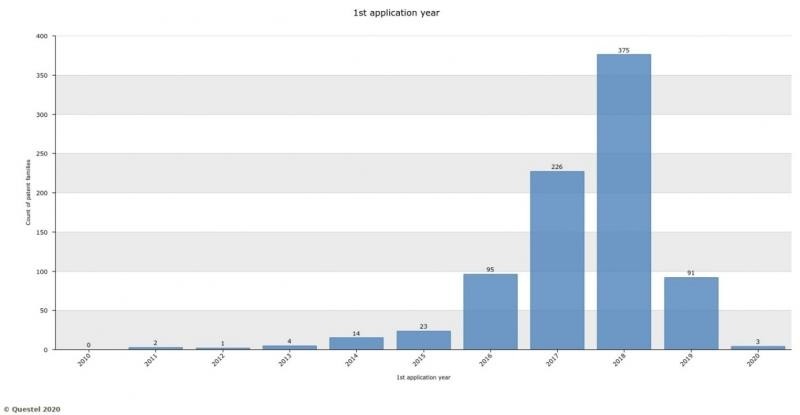 Figure 3: Number of live AI patent families from Chinese companies published in WO, EP or US

The top ten world players from China are listed in Figure 4, where the top applicants are Ping An Tech Shenzhen, Baidu, Huawei and Alibaba, each having 59, 56, 52 and 50 families, respectively. 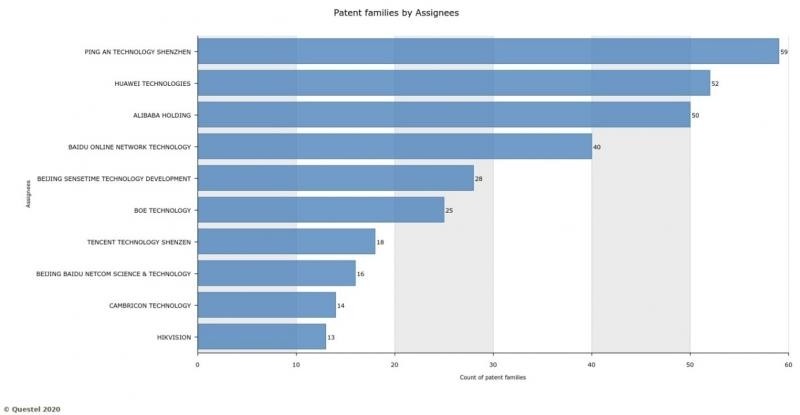 AI patents in the US

According to Orbit, 4,180 AI patent families have been published with assignees from the US. The growth trend, which is more organic when compared to China’s, is shown in Figure 5.

The patent trend confirms that while the AI industry has started much earlier in US it grows much more slowly than in China.

The top 30 US applicants are shown in Figure 6, where IBM, Google (excluding DeepMind), Intel, Microsoft and GE are the top five applicants and own about 24.5% of the total portfolio.

Figure 5: Number of live AI patent families from US applicants between 2010 and 2020

It may be understood that in the US, the AI industry is more concentrated among big companies than in China. Furthermore, data from Thomas shows that Apple has the highest revenue ($248,100 billion in 2017) but owns only 19 patent families.

IBM had about one-third of Apple’s revenue in 2017 but has 339 patent families. It could be that Apple reserves its AI achievements as business secrets and as a company policy does not file many AI patent applications.

However, it is true that the listed companies are mostly known big companies, which indicates that only large-sized companies usually have the resources to perform AI researches and file patent applications at the same time.

Figure 6: Top 30 companies in the US that own AI patents

Therefore, Chinese companies still need to make an effort to file applications outside China in order to compete with US companies on an international level.

There are 1,663 patent families generated by assignees from European Patent Convention (EPC) states, which is much less than in CN and the US. Thirty-nine percent have been granted and the rest are still pending.

The growing trend is shown in Figure 7, which is comparable to the US growth and more organic (eg, about ten times larger in 2018 than 2015) than in China.

Figure 7: Number of live patent families from European Patent Convention applicants between 2010 and 2020

The top five companies own about 27.8% of the total families. DeepMind was acquired by Google in 2014, so the 114 include DeepMind’s and Google’s first European filings.

The total families are far fewer than in the US and China, but notably the European healthcare industry, particularly Siemens and Philips, is a world leader in AI innovations. This is in contrast to China and the US, where the top players are mostly in the traditional fields like computer or internet industries.

AI patent families from Korean companies total 1,940 with 44.4% granted, which is more than the whole of Europe. The high grant rate indicates that Korea has a more mature AI industry. The growth trend is shown in Figure 9, revealing fast growth (ie, 2018 has about 40 times more than 2015) comparable to China and much faster than the US and Europe.

The top 30 Korean companies are shown in Figure 10, and the portfolio is even more concentrated than in the US, with Samsung and LG owning 22.8% and 5.9% of the total portfolio.

Figure 9: Number of live AI patent families from Korean applicants between 2010 and 2020

Figure 10: Top 30 companies in Korea that own AI patents

Japan has the least AI patent families (593 in total and 37.8% granted) compared to China, the US, Europe and Korea. The rate of increase in Japan is also fast (2018 has just less than 10 times the 2015 figure) as shown in Figure 11, but the base number is the lowest of the big five.

Figure 11: Number of live AI patent families from Japanese applicants between 2010 and 2020

The portfolio sizes in Japanese companies are much smaller than in the US, China, Europe and Korea. Even though it is true that Japanese companies have an international view in general, they play a far less important role than companies from those other regions. It may even be said that Japan has missed opportunities to patent AI in the five years since 2016, the most exciting period of the technology’s history.

Figure 12: Top 30 companies in Japan that own AI patents

Before jumping to conclusions, we have collected data in Orbit for patent families from industry (ie, excluding universities and research institutes) that have been at least published in one of the following authorities: WIPO, EPO, USPTO and the National Intellectual Property Administration of China (CNIPA).

The world rankings of top applicants are shown in Figure 13 (note that since the data is representative enough already, the data of parent/child companies is not merged here), where IBM, Samsung, Google, Intel, Ping An, Tencent, Alibaba, Baidu, Microsoft, and GE are the top 10 companies in the AI field.

Notably, among the top 30 applicants, 15 are from China, eight are from the US, four are from Europe, two are from Korea and one is from Japan.

“It is notable that the top five US applicants have a comparable number of, but more patents than, the top five Chinese companies." 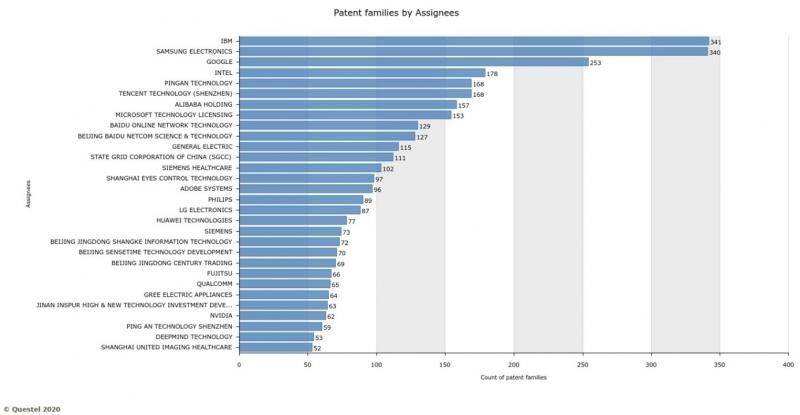 We further summarise the patent data in Table 1 which gives a better comparison.

Table 1: Comparison of patent families and numbers published in other regions

The most important international players in AI are from the US. Owing to Samsung, Korea has a comparable AI portfolio to the whole of Europe. It is clear from the table that China has very strong interests in AI developments from industry and academia. However, the AI patent families in China are mostly filed in the recent three years and a majority portion of the applications are still pending.

Furthermore, the AI developments in Europe come more from the healthcare industry than any other. It seems that Japan has missed opportunities to patent AI inventions during a febrile period of innovation for the technology.

Back to the question: is China the leader in AI? No—at least, not yet. The US is still the leader worldwide.

China follows the US closely and displays great potential from its large number of new AI specialists appearing yearly and may surpass US in a few years.