Protix, circular front runner in the greenfields of insect-based nutrition

Many companies make high quality, protein-rich animal feed. But not every company does so in a circular way, based on vegetable residues from the food industry, using insects. Protix does, and has been doing so since 2009. The Bergen op Zoom-based company is the market leader in the production of insect-based ingredients for feed for fish, chicken, pigs pets and plants, more precisely: based on the larvae of the Black Soldier Fly. Since 2017 Protix has been working together with patent firm NLO. 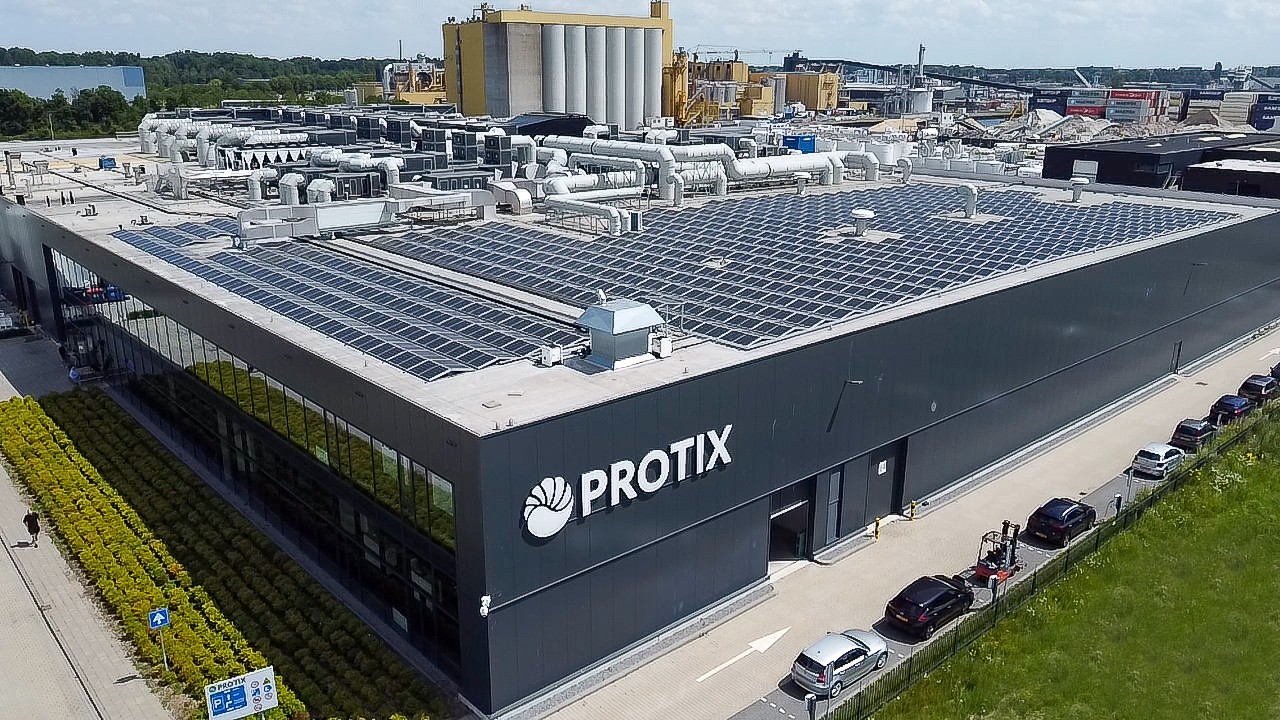 How is it that market leader Protix is so successful? Through hard work, a first mover advantage, technology and clever inventors; the core of the company. And, last but not least, through the patented protection of their inventions. A growth market with a lot of unexplored territory in combination with strong competition: it is of course a no brainer that patents play an important role in this. 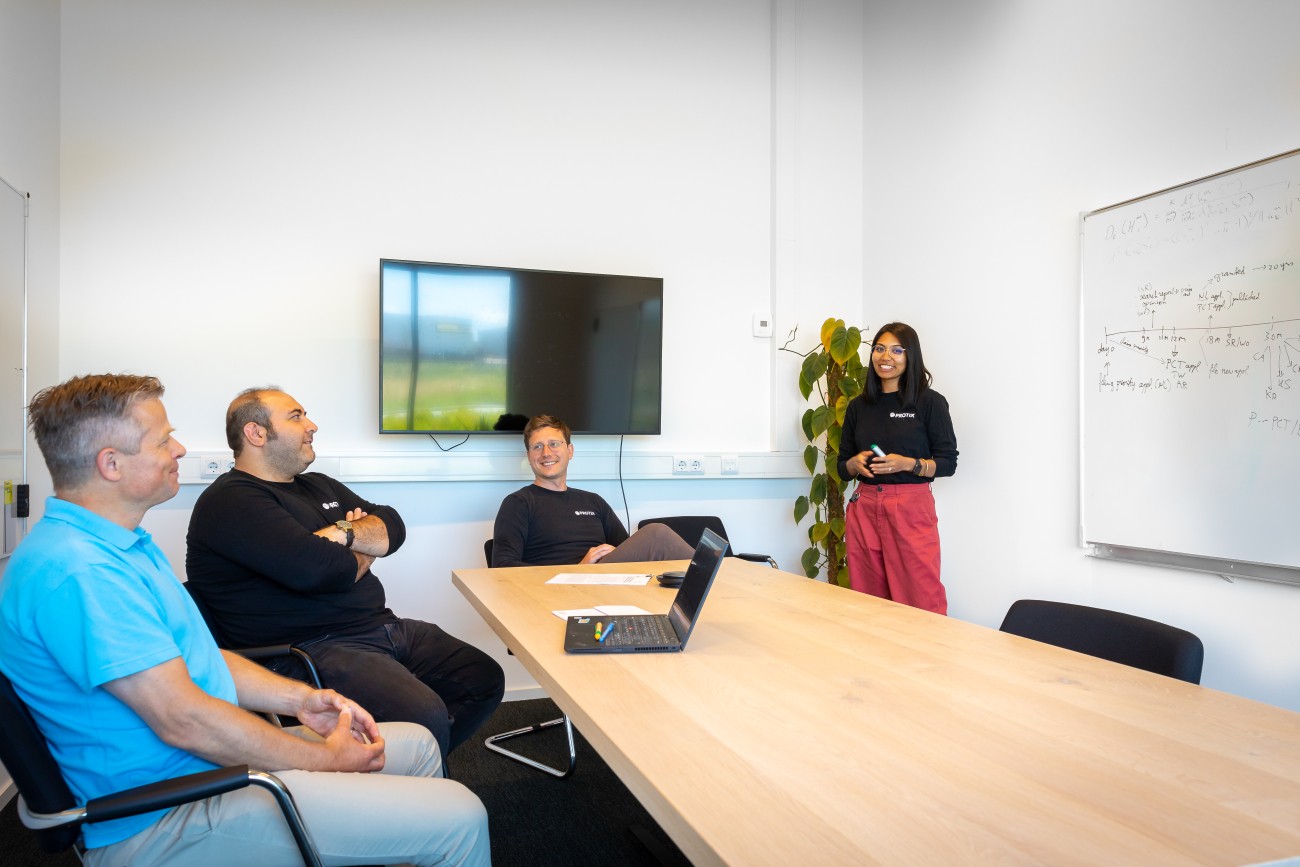 According to Protix’ head of R&D Eric Schmitt, there are basically two main reasons why Protix has such an active patent portfolio.

‘We want to be sure that we have the freedom to operate without other parties filing a patent and blocking us. It is self-defence. The other reason is that there are still new inventions to be discovered. We want to be able to capture the value for ourselves, but also cooperate internationally. As we work with other partners we want to be able to offer them the security of our patent portfolio as they invest in and with us.’

Because Protix was, and still is, a pioneer in the field of insect-based nutrition, it is not immodest to say that the company actually invented the industry all by itself. Schmitt: ‘When we started there was nothing. No basic infrastructure, no support, like what you normally see in livestock industry. We needed to create solutions for each link in the value chain, from feed purchasing to breeding to products.’

The current range of patents is therefore large and varied, as the portfolio has grown along with the development of the company and the industry it helped shaping. The patents therefore relate to virtually every component of the business: from the technology, the infrastructure of the factory and the design of the process to the software and the breeding of the insects.

Schmitt: ‘At first we were really an engineering company, a lot of the first things we did were inventions on how to produce the Black Soldier Flies in terms of hardware. Or biologically: what do the animals need? In the beginning we were developing a lot of technology. Now there is more balance between the production and product portfolios’.

Enter NLO
Since 2017 Protix has been working together with patent firm NLO. Partner Mari Korsten was introduced during an investment round and together with Associate Partner Barend Bouma has been working closely with Protix ever since. Increasingly so. ‘When I started at NLO I was working for twenty different clients, now it narrows down. Protix  is one of the clients that take more and more of my time. That indicates that it is really exciting and a good collaboration.’, says Bouma.

He also sees a shift from technology and process to product in the nature of patents. A logical step now that the company is mature and on the eve of scaling up. Schmitt: ‘As the company developed and we started to become more active in selling the product and we saw there is a market for the product, we became much more able to focus on protecting that.’ Bouma: ‘We advised Eric to identify the key aspects in the factory and to identify not only those key aspects, but also to try to cover that with patent protection because that makes it difficult for third parties to step in’.

Patenting undeniably bears fruit. It often happens that a first mover advantage turns into a disadvantage when new players enter the market; this does not apply to Protix. On the contrary, as Schmitt explains: ‘We have patents on the breeding systems. We see that other companies have huge difficulties in controlling the breeding. We have a stable breed here. We have a chain of technologies in the breeding process which collectively form a blockbuster. We are dominant and have significant production. We are the main producer.’ 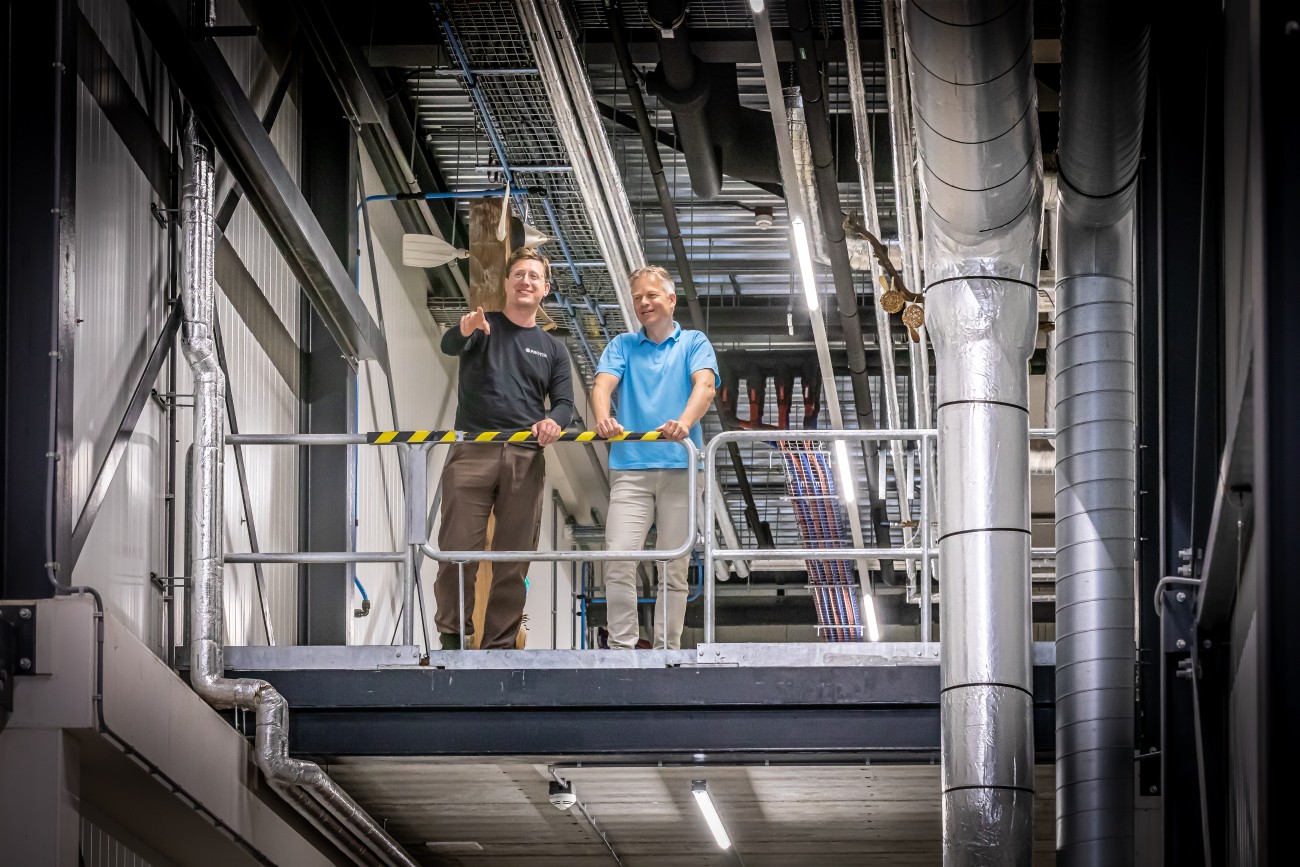 We want to be sure that we have the freedom to operate without other parties filing a patent and blocking us.
Eric Schmitt - Protix, Head of R&D

Both Schmitt and Bouma emphasise that the relationship between Protix and NLO resembles a partnership and goes far beyond simply instrumentally outsourcing the process of patenting. Bouma: ‘Sometimes Protix inventors, engineers and product developers see a certain improvement as just another regular improvement. But we from NLO may see it as a first improvement in this kind of food production industry or farm application. For example: the first time an insect product is used which is perhaps not recognized by this specific engineer or technologist, but we for example see handbooks never mentioning anything about applications they are uncovering with insect ingredients. We follow the technology and we have identified the essential steps in the process. But if we see something new, we discuss: how important is this step? Is it really an improvement? What if others could copy it? Then we discuss whether we should try to cover it in a patent application’.

Schmitt: ‘As in strategy: they fill in some of the big gaps. As we have our business strategy, they will come with points more from the intellectual property side. But it’s not only about patenting. You want to have a good discussion about where certain things can go. NLO is also very helpful in weighing the decision to let things go’.

Balancing act
Because that is also a balancing act - which patents are really essential for a process and which can you let expire at some point? ‘We need advice from them where to find the balance. Sometimes there is speculation about if a patent will become important. We have patents that are very low risk, we have others that are more ambitious. Some of these are no longer viable in five years. When we make those decisions, we value NLO’s advice’.

Another balancing act: when does a patent actually block innovation? For most innovations are the fruit of collaboration. With universities for example. Bouma: 'In the cooperation between Protix and universities, the consideration must be made whether a certain patent should not be applied for first. Sharing or partly retaining control? That is also a strategy. Do you keep everything to yourself? To what extent do you share knowledge? Sometimes that is better for innovation.'

Schmitt: ‘As we moved into making our product position stronger it has been really helpful to work with NLO’s team which serves a wide range of industries from agri, food, engineering and pharma. It is important to get perspectives on that from the outside in and to work with them to kind of guide where we would want to develop that portfolio. That outside in has been very helpful.’

‘Our collaboration really spans the whole gamut of the value chain. What is interesting is that already in the early stages we usually get in touch with NLO to look at the first signals from the lab. Maybe there is nothing to patent at that moment, but we try to keep each other aware of that.’

In the cooperation between Protix and universities, the consideration must be made whether a certain patent should not be applied for first. Sharing or partly retaining control? That is also a strategy.
Barend Bouma - Associate Partner & European Patent Attorney | NLO

In the meantime, Protix has about 250 patents on its books, 150 of which have been published. Perhaps less visible, but behind every patent there is of course an inventor. Schmitt therefore does not only see a patent as a strategic competitive advantage which gives Protix this front runner position. At least as important he sees the patent as a way to highlight the inventors.

As far as Schmitt is concerned, the importance of the inventors cannot be emphasised enough and he thinks it is only fair that they receive credit for their work. ‘There can be reasons why a company keeps things secret; often it is the company’s success story which matters in communication. We have a ground breaking portfolio of patents, we made ground breaking inventions and we could have ‘Protix’ on everything. But I really value patents because it is one way to ensure that the people that work for us get their name as inventors on these early stage inventions for the rest of their lives. Their name is on it, they are in position to go to conferences – which they do – and get credit for what they are doing instead of things kept secret’.

According to Schmitt, this intellectual property ownership is crucial. ‘It makes them joint owner of what we are creating here. We publish more journal articles than any other company at the moment. Part of the reason why we do that is in our own self-interest: we want to go public with it. But it is also an opportunity to publicly highlight the inventors and authors and the ground breaking work they are doing. We are really trying to get the people the exposure they deserve. On nutrients, machines or software.’

Future proof
Protix is now on the eve of a major leap forward: expanding in North America and Europe, its largest market. Production is set to increase significantly over the next five years with the construction of a new factory, the first in what is likely to be a whole series.

‘This is the next leap forward. From an intellectual property point of view we are trying to refine our commercial strategy, where and how we want to support our customers. That comes into the patenting as well. On the tech side I think the existing plant is already very advanced, but we see significant improvements in for example energy savings, we are working on ways to streamline the process, make it more controllable. And if improvements are key to the production process they will be patented.’

What will the future look like? Schmitt certainly does not exclude that Protix will also move into the market for human food consumption. ‘Protix has already had novel food dossiers approved for human use for different species. We filed additional ones, for more products so that process is under way. It might be huge. For human use we also file patent applications, we do not limit any of the patent applications for pet or animal use only, we just anticipate already. We are laying the groundwork. It is something we cover and it is a market to develop’. 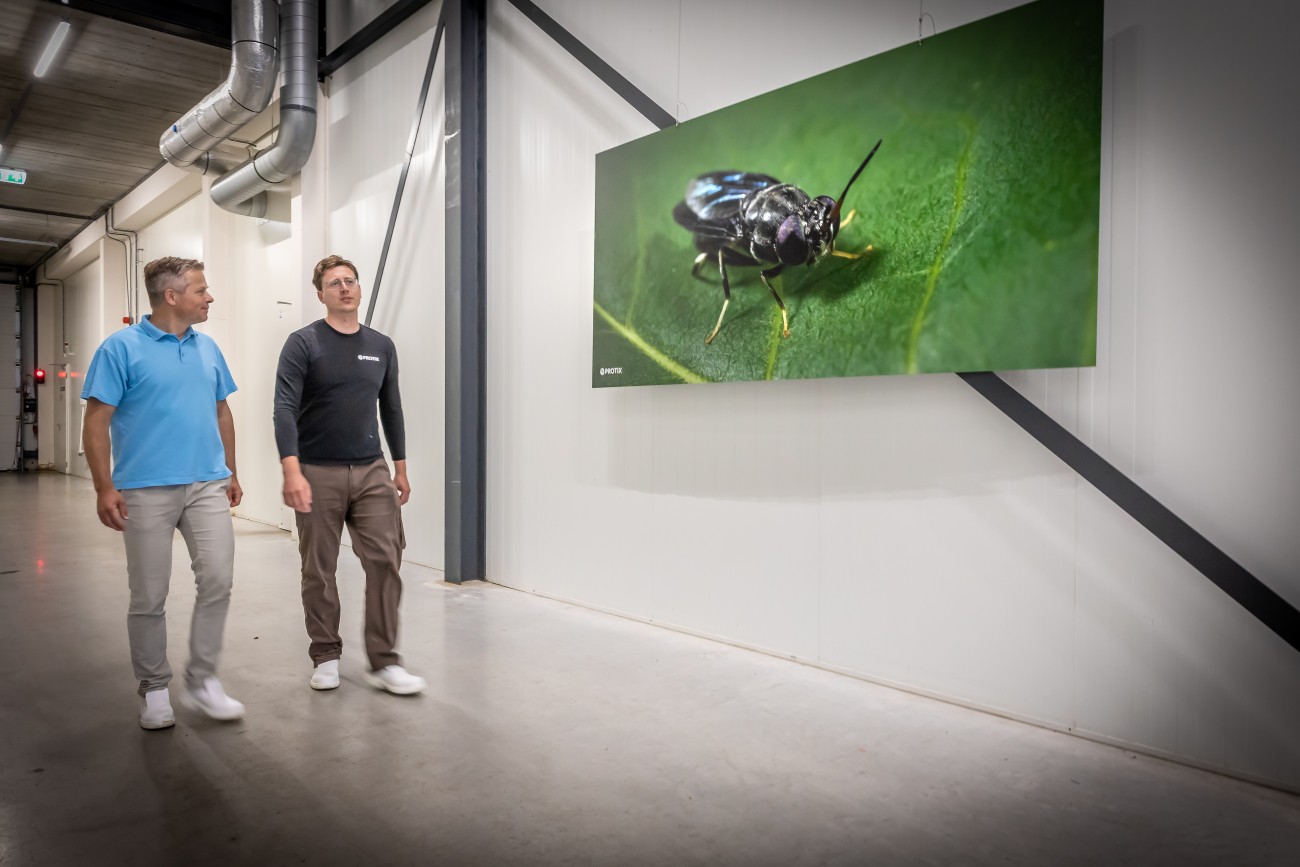 Would you like to read more articles about sustainability, innovations and Intellectual Property? Feel free to have a look at Fortify: NLO's client magazine.