How to successfully protect antibodies at the EPO

Patents Life Sciences
Written by Caroline Pallard
A majority of the top 10 blockbuster drugs are antibodies. Antibody therapies are booming. This is the result of continuous research efforts that are still ongoing. These massive research activities are first translated into massive patenting. The introduction of a section dedicated to antibody drafting in the Guidelines for Examination at the European Patent Office (EPO) in March 2021 is an illustration of the importance of antibody patenting.

Based on a few decisions of the Boards of Appeal of the EPO and on some explanations provided by the Guidelines for Examination at the EPO, this article provides some insights as to successful antibody claim drafting at the EPO.

Defining an antibody by functional features

It may be tempting to define an antibody by solely relying on its activity or its function. For example:

If protein Y is novel, the antibody defined under point (1) is likely also novel.

As explained in the Guidelines for Examination at the EPO (G-II, 5.6.1.3), defining an antibody exclusively by functional features is at the risk of the applicant who has the burden of proof of novelty:

If an antibody is claimed exclusively by functional
features and the prior art discloses in an enabling
manner an antibody directed to the same antigen
using an immunisation and screening protocol
that arrives at antibodies having the claimed
properties, it has to be assumed that the prior-art
antibody inherently displays the same functional
properties as the claimed antibody, which lacks
novelty (cf. G-VI, 6). On the other hand, if the
antibody is defined by unusual parameters, care
has to be taken that these do not disguise a lack of
novelty (F-IV, 4.11.1). In both these cases the burden
of proof of novelty resides with the applicant.

Defining an antibody by exclusively relying on functional features potentially provides a broad scope of protection. The applicant should be prepared to be challenged on novelty and should be able to demonstrate the novelty of its antibody. Complementing and possible alternative ways of defining the antibody should be present in the application.

In decision T 0032/17 of the Board of Appeal of the EPO, it was held that a ‘product by process’ feature, referring to a group of specific deposit numbers, did not confer any additional technical feature to the antibody claimed. The claim in question reads as follows:

The Board held that:

As a result, the Board only considered the functional feature defining the antibody, and this claim was not novel over antibodies of the prior art.

This recent and first decision of this kind is potentially alarming for applicants. In the past,
such reference to a deposit was quite common for defining antibodies. If this deposit feature is present in a claim, we advise to have alternative strategies in place, such as disclosure of the amino acid sequence of the antibody in the application as filed.

Defining an antibody by structural and functional features

A basic mix of structural and functional features

Claiming an antibody, relying on structural features (full sequence or complementarity-determining region (CDR) sequences) and indicating a basic activity/function (binding a given enzyme) should meet the industrial applicability (Article 57 EPC) requirements of the EPO. Such antibody may also be novel (Article 54 EPC).

When will such antibody be considered inventive?
For example:

Finding a new antibody targeting a known target is not sufficient for establishing the presence of an inventive step. In other words, ‘structural non-obviousness’ does not equal the presence of an inventive step. This antibody, being novel by virtue of its sequence, needs to exhibit a specific attractive functional feature that was not yet known for this type of antibody in order to be considered inventive by the EPO. These surprising functional features may be as defined in the Guidelines for Examination (Guidelines G-II, 5.6.2):

The subject-matter of a claim defining a
novel, further antibody binding to a known
antigen does not involve an inventive step
unless a surprising technical effect is shown by
the application. Examples of surprising technical
effects when compared to known and enabled
antibodies are, for example, an improved
affinity, an improved therapeutic activity, a
reduced toxicity or immunogenicity, an unexpected
species cross-reactivity or a new type of
antibody format with proven binding activity.

It therefore means that relying on the structure and the basic function/activity of an antibody may notbe sufficient to get a patent at the EPO.

A more elaborate mix of structural and functional features

In decision T 0941/16 of the Board of Appeal of the EPO, the applicant claimed a monoclonal antibody that was defined by several structural (features (d) and (e)) and functional ((a), (b) and (c)) features. Claim 1 reads as follows:

The Board held that: 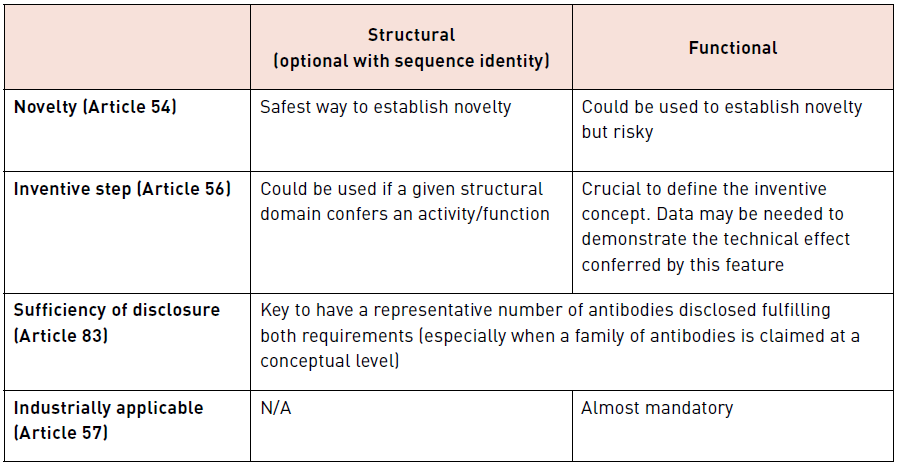 Table 1. Summary of the impact of structural and functional features when assessing each of the EPO requirements

The Board concluded that the application was not sufficiently disclosed (Article 83 EPC). This case illustrates that defining an antibody using structural and functional features is not always the winning recipe at the EPO. The presence of several functional features (ie, features (a), (b) and (c) of the claim) were sufficient to define an antibody exhibiting surprising activity. This antibody should be considered inventive according to the Guidelines (G-II, 5.6.2).

However, one of the structural features (ie, feature (e) of the claim) needed to be more specifically defined to meet the requirements of sufficiency of disclosure. The issue with feature (e) may have been solved if the applicant had rendered mandatory the presence of the six CDRs.

Novelty of an antibody could be conferred by its structure (ie, sequence). However, such a new antibody is not inventive if other antibodies targeting the same target are already known in the art. The presence of an inventive step will only be acknowledged when this new antibody exhibits a specific property/function/activity that is attractive for solving the technical problem underlying the invention.

On the other hand, using only functional features to define an antibody provides a broad scope of protection, but this scope may be challenged by the EPO or third parties. Depending on the prior art and on the amount of experimental data in the application, we advise that one design several alternative strategies in the application to define the antibody in the broadest way possible for the EPO and for each of the other envisaged jurisdictions.

Visit her profile
Caroline Pallard has extensive experience of drafting and prosecuting complex patent applications and supporting licence negotiations and IP due diligence, including for initial public offerings. She is also involved on a regular basis in European opposition proceedings up to the Board of Appeal. She frequently advises biotech start-ups on their IP strategies.
Caroline Pallard Dutch and European patent attorney
Share this page