Trademarks
Written by Peter Simonis
There are various grounds on how a trademark application can be refused by the Benelux and EU trademark authorities. If a trademark is refused, it is usually because of its descriptive character. However, a trademark can also be refused if it is in conflict with public order or good morals.

The General Court of the EU has recently decided that the company below, who decided to prominently use the word MAFIA in their logo, is in conflict with the public order and morale.

The trademark was registered by a Spanish restaurant chain. The Italian government made an objection against this trademark. The word mafia refers to criminal organisations and by the use of it, would induce negative emotions. Moreover, the trademark would damage the positive image of the Italian cuisine and would turn the negative association people have to the word Mafia into a positive one. 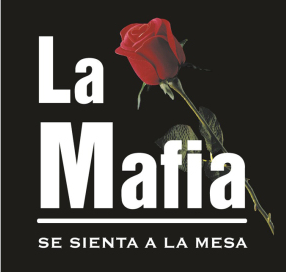 The Spanish chain denies that the Trademark refers to the Mafia, the chain argued that it was supposed to be a parody on the movies of the Godfather. The Court however ruled that the Mafia would be known to the public as a criminal organization and does not recognize the chain’s argument that it would refer to The Godfather-movies. With the adding of the rose and the sentence ‘Se sienta a la mesa’ (which translates to: sits at the dinner table), the reputation of the Mafia gets whitewashed. The Court therefore ruled that the trademark was in conflict with the public order and annulled the trademark registration.

Although it does not happen often that a trademark gets denied or destroyed due to it being in conflict with the public order or morale, a certain pattern can be recognized in the actions of the European trademark authority. The EUIPO appears to be sensitive to any referral to drugs (it has denied many trademarks in which the words cannabis, hash, or weed were included) and has an aversion against the F-word. Earlier this year, EUIPO denied an application for a logo, because the sentence “Who the f*ck is Ellis” was incorporated in it.

Secondly, it is also possible that a trademark gets denied because it has a despicable meaning in one of the languages of the EU. Seemingly innocent words such as ‘kokot’, ‘pica’, and ‘curva’ can have a certain meaning in different countries – which can be quite offensive when written on packaging, trucks and billboards. Therefore, it is smart to get a new trademark checked on negative connotations in other languages.