Patents
Written by Karen Rodriguez Hernandez
As every year, the European Patent Office published a highly informative and extensive report on the 2021 statistics and trends: the Patent Index 2021. This index reveals remarkable trends, for example a massive increase in 24% of applications from People's Republic of China in the digital communication field; and an overall increase of 4.5% of European applications, resulting in a total of 188,600 filings. In this article, we approach the five most noteworthy topics from the statistics and trends in 2021. Our special focus is on medical technology and healthcare, which is one of the fields that has been consistently at the top.
A general impression on the EPO publication: an increase on the demand of European patents

#5 The general impression: an increase on the demand of European patents

The fluctuations above seem to correlate with the demand from the US, which decreased by 5.9% in 2016 and by 3.9% in 2013. Possible reasons on these declines include changes in the US patent law in 2013 and 2016 and the steps made towards the unitary patent between 2012 and 2013. Past year was not the exception, applications with origin in the US increased by 5.2% in 2021.

A steady number of applications in medical technology

#4 Steady number of applications in medical technology
Regarding medical technology, the total number of patent applications increased by a modest 0.8% (128 more applications) relative to 2020. US applicants filed almost as many applications as applicants from all EPO member states together, that is about 38% from the 15,321 applications received by the EPO in 2021. Interestingly, global brands (e.g., Philips, Medtronic, J&J, Boston Scientific, etc.) only account for 19% of the total applications, indicating a great diversity of subfields and large participation of European and American SMEs, individual inventors, Universities, and public research organisations. This trend is observed in many technical fields. For example, from the applicants based in Europe, 59% belong to one of these “small” groups, even if they contribute only 25% of the total applications filed at the EPO. 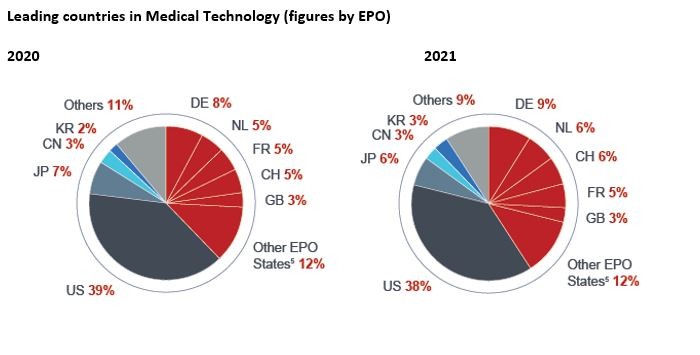 In fact, since 2016 the highest contribution from EPO member states has been in medical technology. This is not so evident in the overall trends due to the powerful position of Asia regarding digital communication and computer technology. In general, the strongest Asian countries (e.g., Japan, China, and South Korea) accounted for only 12% of the share of patent applications in medical technology at the EPO. This small share indicates that Asian countries have a different market focus than European and US companies. 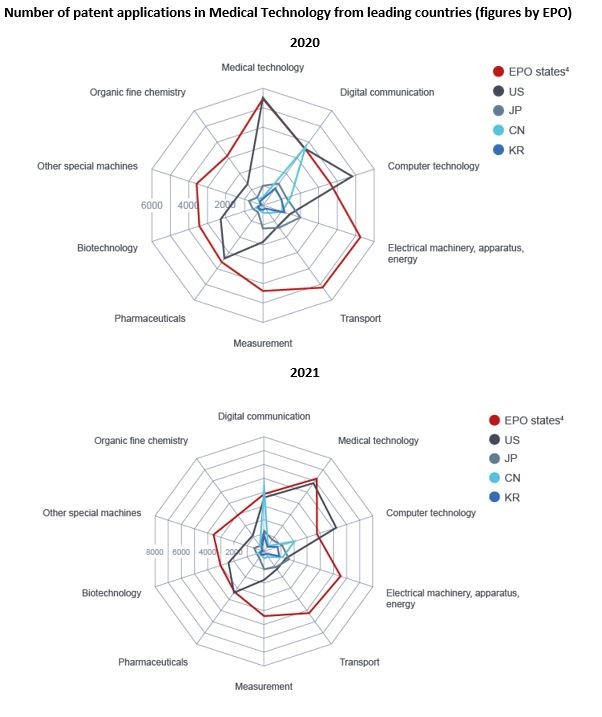 A big decline in granted patents

#3 Big decline in granted patents
A different history can be told by looking at the number of granted patents, which in 2021 decreased by 18.6 %, that is 24,910 less than in 2020. This decrease likely marks the end of the extraordinary efforts from the EPO to reduce its backlog of applications since 2014, that produced an impressive increase of almost 95% in granted patents between 2015 and 2020. The decrease of granted patents can be observed across all fields. In the case of medical technology, the number of granted patents dropped by 19% in 2021. According to the EPO, search and examination timeliness are 4.8 and 23 months, respectively, suggesting that the intention to grant is given around 2.3 years after the application, an indicator that has not changed much in the last few years but decreased by approximately one month in comparison to the previous decade (2010’s).

Medical technology is not one field - it contains much more
The EPO categorised medical technology as a subcategory within the Instruments field. However, there is no strict definition of medical technologies in the official patent classification systems (i.e., CPC, IPC). Everyone working in or nearby the medical field is well aware that medical innovations are typically the result of multidisciplinary efforts. Progress made in any of the other technical fields can open a new door for medical devices. Many examples can be given. One of them is the patent applications in audio-visual technology that increased by 24% in 2021 (from 4,388 to 5,440 applications), which led to e.g., faster, and more efficient telemedicine, which pretty much accelerated in the last couple of years. Another example is found in additive manufacturing that have found their way to healthcare. According to a news article from the EPO in 2020, the medical and health sector have generated the largest number of European patent applications in 3D printing in the last decade, with 907 filings in 2018. A quick search in Espacenet including the A61 (medical or veterinary science; hygiene) and B33 (Additive manufacturing) classifications finds 1081 publications only in 2021, giving a glance of the vast development on additive manufacturing for healthcare. This is not to mention other specialties like electronics and robotics that directly enhance medical technology; and of course, artificial intelligence, which has allowed healthcare to move towards a data-driven industry.

A slightly different perspective can be observed depending on the technology field. During the last International women’s day, the EPO wrote a special article based on the WIPO's IP Statistics and Data Centre. According to the WIPO, in 2021 the proportion of applications with at least one woman inventor was 50% or more in the fields of biotechnology, pharmaceuticals, organic fine chemistry, food chemistry and analysis of biological materials. In the case of medical technology this proportion was 33%.

In the patent index 2021, the EPO cited Eurostat and the AEI to report an almost equal proportion of women and men in tertiary education in Europe and US in the last years. The EPO suggested that women are more involved in expanding-knowledge fields like astronomy, psychology, or sociology than in technical fields like physics, chemistry, or engineering. Concluding that these women are more likely to publish academic papers than patents. However, female authors do not seem to account for 50% of the authorship in high impact journals. A study published in the British Medical Journal, shows that the number of female first, last and corresponding author remains below 46% in manuscripts between 2018 and middle 2021, in medical and neuroscience journals. Another note in the Nature website highlights that between 2005 and 2017 women accounted for roughly 25% of first authors in Nature and Science and just over 35% of first authors in PNAS (Proceedings of the National Academy of Sciences). These figures give a glance that in terms of gender gap in both inventorship and knowledge, there is still long way to go. On the same segment, the EPO announces a full study, with more detailed information by technology field later this summer.

Main highlight from EPO's publication: The Netherlands is 4th runner up in Europe

#1 The Netherlands 4th runner up in Europe

According to the EPO, the Netherlands is positioned in 8th place in the world and 4th place in Europe, in filing European patent applications. This corresponds to 3% (6,581) of the total number of applications in 2021. Given its small population, this 3% disposes the Netherlands in 4th place if we consider the ratio of European patent applications per million inhabitants, after Switzerland, Sweden and Denmark. Important Dutch applicants are Royal Philips, Signify, and ASML.

The biggest share of the number of applications from the Netherlands in 2021 was in medical technology (13.4%), positioning the country in 4th place in the world with 884 European patent applications, after US, Germany, and Japan. This number increased by 3.6% from 2020 to 2021, breaking a new record since 2016. Obviously, many of those applications (653) originated in Philips, which made the Dutch company the most relevant applicant in the world in the medical field in 2021, after being 3rd in 2020. However, these numbers also reveal that the non-Philips Dutch filings in the medical technology field decreased by 12.4% in 2021, suggesting less applications from other known companies but also SMEs, Universities, etc. possibly because of the COVID-19 crisis.

European Patent Office‘s press release can be found on their website. Also, a nice video by the EPO presents briefly the most important trends of last year. Key figures can also be found in single page form.