Example as basis for amendment

Case Law Patents
This decision relates to an amendment of a claim directed to a tablet. The amendment relied on features as disclosed in the description in combination with a selection of ingredients disclosed in the examples without their amounts. The patent was revoked in opposition, because the omission of the relative amounts in the amended claim resulted in an unallowable intermediate generalization. The patent proprietor lodged an appeal, arguing that the examples are non-limiting and that whether the amounts of the ingredients influenced the effect of the compositions was not an issue in the assessment under Art. 123(2) EPC. The Board agreed with the opposition division.

Claim 1 of the main request has been amended as follows:

(c) a film coat;
and wherein the tablet is made using a dry granulation process.

Amended claim 1 was essentially based on the tablet compositions described in paragraph [0006] with further definition of the specific components in line with Table 3.

Paragraph [0006] reports that compositions for tablets prepared using a dry granulation process and comprising up to 5 mg apixaban particles having a D90 less than 89 μm were found to allow for consistent in-vivo dissolution, consistent exposure and consistent Factor Xa inhibition. This report is followed by the statement that accordingly the invention provides a pharmaceutical composition comprising crystalline apixaban particles of such size as measured by laser light scattering and an acceptable diluent or carrier. 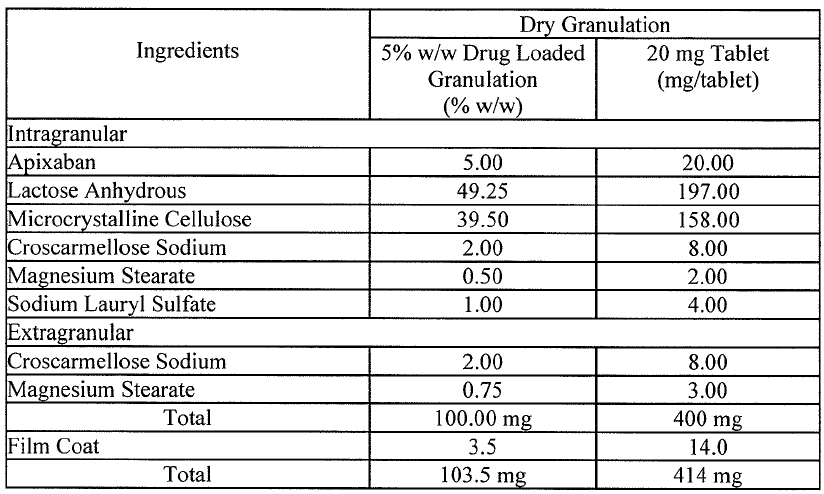 The Board observed that Table 3 mentions only one type of tablet, namely the “20 mg Tablet”. The middle column of Table 3 refers to “5% w/w Drug Loaded Granulation”. The Board also concluded that “100.00 mg” and “103.5 mg” are inconsistent with the heading of the middle column and that taking into consideration the format shown in Table 4, the ingredients actually add up to 100% and 103.5%. Therefore, the skilled person cannot directly and unambiguously derive a disclosure of a 5 mg apixaban tablet from  Table 3.

The Board further observed that the compositions of Table 3 are presented in the context of bioequivalence studies. As supported by documents on file and by par. [0008] of the application as filed, the excipients of Table 3 influence drug dissolution rates. According to the Board:

This influence is of relevance in the context of the assessment the amendments under Article 123(2) EPC, as in view of the mentioned context of the disclosure of the compositions of Table 3 this influence indicates a functional relationship between the choice of components (…) and the amounts of those components (…). Irrespective of the non-limiting purpose of the examples (…).

Thus, considering the relevant relationship between the ingredients and their amounts listed in Table 3 together with the fact that Table 3 does not exemplify a 5 mg apixaban tablet, the Board asserted that:

the skilled person would not directly and unambiguously derive from the application as originally filed that the disclosure in paragraph [0006] of the tablet compositions comprising up to 5 mg apixaban should be combined with the features of the tablet compositions of Table 3, let alone with the ingredients listed in the left column of Table 3 abstracted from their relative amounts.

Accordingly, the Board concluded that the amendment in question does not comply with the requirement of Art. 123(2) EPC.

More about this case: