An inescapable trap after including a feature based on the drawings

Case Law Patents
A Proprietor had amended the claims prior to grant by including a constant freezer wall thickness based on the drawings. During opposition of case T2151/19, the Patent was maintained as granted. The Opponent filed an appeal and argued among other things that the inclusion of the thickness-feature in claim 1 as granted lead to an extension of subject matter. The Board of Appeal agreed with the Opponent and revoked the Patent.

European Patent No. 1906117 had been maintained as granted during the Opposition Proceedings. In appeal, the Opponent (O) requested that the patent be revoked on the basis of Art. 100(a) EPC and Art. 100(c) EPC. Specifically, the introduction of feature 1.8 would extend beyond the subject matter of the patent application as filed and thereby violate Art. 100(c) EPC.

Interpretation of the claim

Claim 1 of the main request related to a “freezing compartment of a vertical freezer”. The freezing compartment has an upper wall (4, feature 1.2) with a cavity (6) having a front side inclined upwards (feature 1.5). The following two features where of particular relevance to the discussion regarding extension of subject matter: 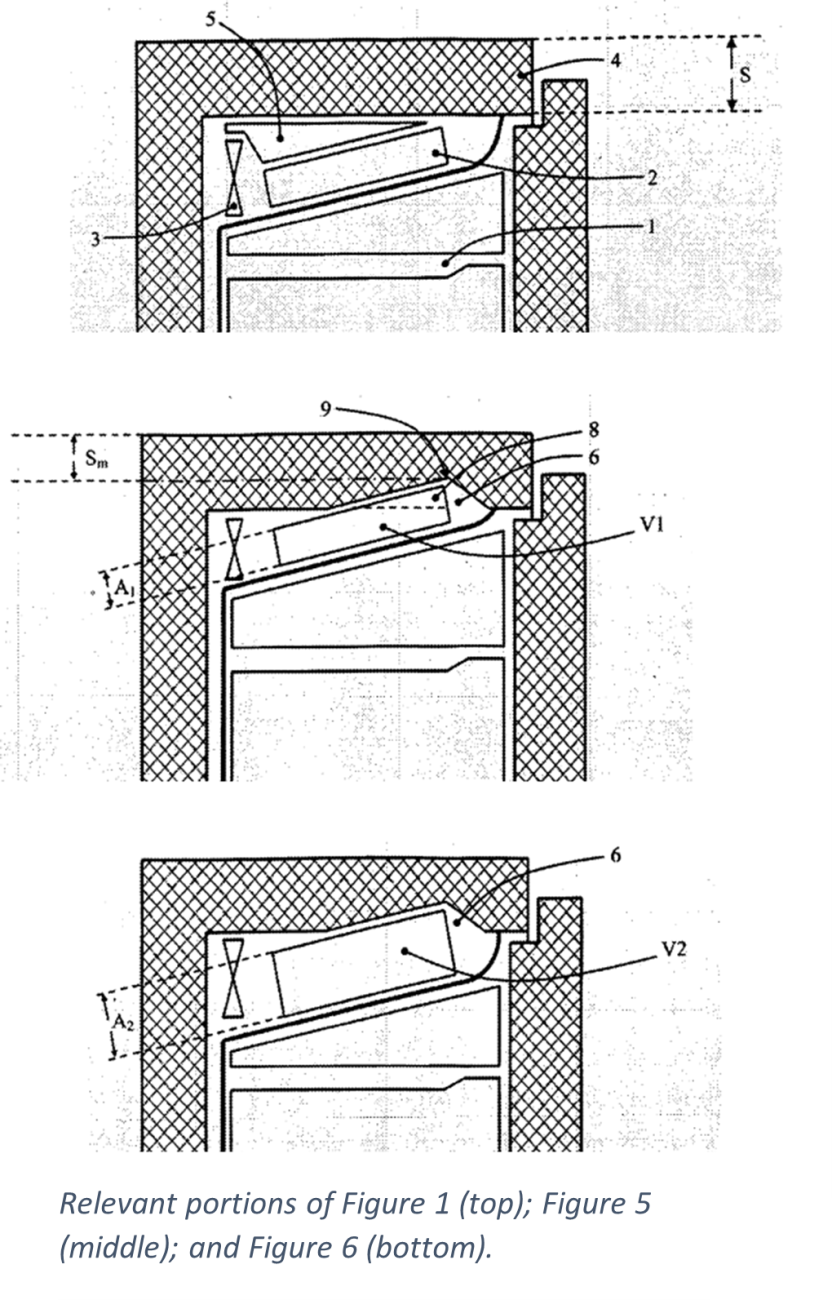 P, however, considered that feature 1.8 was derivable from the Figures and the application as filed: “from Figures 1, 5 and 6 the skilled person would have unambiguously understood that this thickness was indeed constant, i.e. uniform, except in the area of the cavity. A cavity was a hollowed-out space, i.e. the cavity was formed by sacrificing a part of the precursor upper wall shown in Figure 1. Due to the insulation requirements of such a precursor wall, the wall outside the cavity has to have a uniform thickness.”

Decision by the Board on the Main Request

The Board referred to established case law, which states that sizes or proportions can only be derived from figures of the application as filed if, inter alia, one of the following criteria applies:

The Board was of the opinion that Figures 1, 5, and 6 are schematic representations and not technical drawings. As far as thicknesses were indicated in the figures, they would relate to average thicknesses. In addition, the Board considered that O raised a valid point by arguing that Figures 5 and 6 only showed a single cross-section through the device, and did not allow any conclusions to be drawn about the thickness in further cross-sections or cross-sections in other directions.

Moreover, the disclosure of the description did not imply that a constant thickness was essential. P had argued that due to the insulation requirements of such a precursor wall, the wall outside the cavity must have a uniform thickness, yet this was found to be not convincing, since also the cavity as such reduced the insulation effect.

The Board therefore concluded that the main request was not allowable because of extension of subject matter.

The patent could not be saved because of the inescapable trap

In response to the preliminary opinion of the Board as communicated under Art. 15(1) RPBA 2020, auxiliary requests 9a and 9b were filed. These requests were considered late filed and their admittance was therefore subject to the presence of exceptional circumstances. The Board was of the opinion that no such circumstances were present and therefore auxiliary requests 9a and 9b were not admitted into the proceedings.

However, for the sake of completeness the Board indicated that even if the auxiliary requests were to be assessed, then the conclusion would be the same. Feature 1.8 was establishing a situation commonly described in the case law as an inescapable trap (see G 1/93). The patent could not be saved because of the inescapable trap.

As a result of the added subject-matter in the main request, and the resulting inescapable trap, the decision under appeal was set aside and the patent revoked.

More about this case: