The scope of protection of the ‘well-known’ Kipling logo

Revocation of a younger trademark

The following criteria are important for a revocation test for trademarks with reputation:

The first question that arises is whether there are any similar marks at all. It is settled case-law that word elements of trademarks are the most important, such as ‘KIPLING’ and ‘TEGAOTE’ in the logos of both trademarks. In this case, the ‘KIPLING’ and ‘TEGAOTE’ marks are quite different from each other, but figurative marks concern the degree of similarity between the figurative marks as a whole (the two logos). Certain figurative elements in both logos do show similarities.

‘Decorative elements’ such as the circle and the star in the logo are not very distinctive trademark elements. Due to the equal size of the circle elements and the identical position of the three stars in both trademarks, there is an admittedly low degree of similarity. Based on this, we look at the second criterion: is the prior trademark a trademark with reputation?

How well known is the prior EU figurative mark in relation to Kipling bags? We test this question in a legal sense: a trademark has a reputation if the prior trademark is well known to a significant part of the relevant public for Kipling bags. Several factors play a role in this assessment:

VF International argues that the EU figurative mark has a reputation for the bags, particularly in Belgium, the Netherlands and France, due to intensive use. Evidence has been submitted in support of this claim, showing that the EU trademark is displayed on almost all bags marketed by VF International. The sales of the bags amount to between 76 and 116 million euros annually, according to the submitted evidence.

The EUIPO concludes from the submitted evidence that the Kipling figurative mark is used long and intensively. As a result, the trademark has a reputation, which means it takes up an important position among the most important trademarks in this market segment. The sales figures, marketing spend and brand awareness evidenced by the evidence show that the trademark has a reputation among the relevant public buying bags.

3. Damage to the reputation of the prior trademark

Relevant factors in confirming association or not are:

An important addition to the above points is that there can already be association if there is a small degree of similarity. In particular, because the younger trademark is registered for identical products (bags), the relevant public can establish a link between the trademarks. The relevant public buying bags in a store attaches great importance to visual similarities, such as figurative elements within the logo.

3.2. Is there an Unfair advantage?

The key question is whether registration of the TEGAOTE figurative mark takes unfair advantage of the Kipling figurative mark with reputation. The risk of confusion is therefore not a requirement. 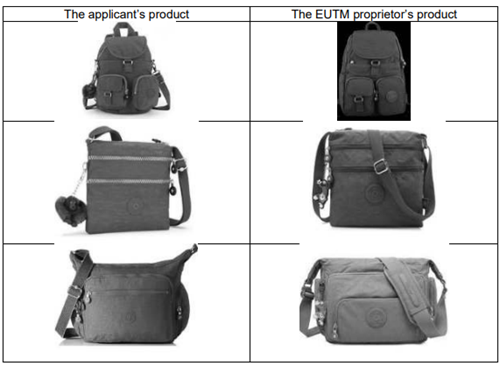 Based on the above findings, it is likely that when purchasing bags of the younger brand, the relevant public will believe that the TEGAOTE figurative mark is related to the prior figurative Kiping trademark with reputation, despite the fact that there need not be any confusion between the brands. That may boost sales of TEGAOTE bags, while TEGAOTE has not made any substantial investments in its brand. TEGAOTE takes unfair advantage (free riding) from the investments made by VF International in respect of the prior Kipling figurative mark.

The fact that things do go wrong with the documentation and presentation of evidence is demonstrated by the so-called Big Mac case. In this instance, McDonald’s was unable to prove that its Big Mac trademark was ‘used genuinely in a legal sense. Therefore, the trademark was removed from trademark registration. Cases like this are a wake-up call for trademark owners to properly document trademark use, so the trademark owner can continue to invoke its (well-known) trademark.